our MISSION AND VISION

what drives us to do what we do.

Currently, both published and unpublished writers meet to try out ideas and hone their craft, knowing they will be treated with kindness and respect while encouraged to put their fingers to the keyboard and WRITE.

Writing skills develop, projects begin and most reach publication. At a recent "meet the authors" event, our group was represented by six authors with a total of 12 published books–fiction and non-fiction.

Four people began the Whyte Dove Writer's Group. Over the years, as people have come and gone, the group has maintained about 8-10 regular participants, meeting continuously one Tuesday each month, first in homes then in a local library.

In January 1991, the Lake Fork area of Texas had no writer's group to inspire individuals to share memories, knowledge, and creativity via the written word in order to make a difference in their readers and the world.

Whyte Dove Writers' Group has been meeting since 1991. 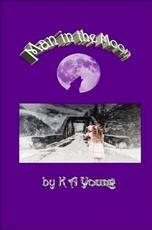 A picture may be worth 1000 words, but it'll never take the place of a novel.

Man in the Moon
​and more on the way

Our Mission – by the written word to stir minds to think anew, emotions to feel afresh, and spirits to come alive

Our Vision – to impart a nugget of truth to each reader so that he or she gains a value to be invested in lasting improvements of character, relationships, and hope with a sure foundation.

– Man in the Moon first released in glossy paperback

– second edition of Man in the Moon released on Amazon.com in glossy paperback and Kindle e-book